Okay, so this is downloadable content for Fallout 3 (it's also part of the 'Game Of The Year' edition, which is what I have) and is a departure from the post-apocalyptic setting of Fallout, but I'm loving it. I'm loving it because it has that 1950s sci-fi movie feel about it, the way it looks and souns, and the alien blasters/atomizers/disintegrators are so freaking cool in VATS that I want more of it. 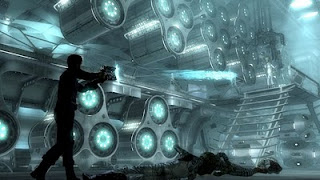 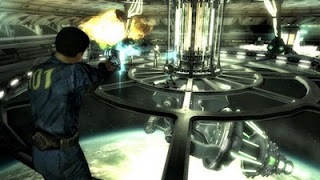 In fact, they should just make an entire game using this platform and style. A totally wacko 1950s sci-fi shooter (minus the full body and head exploding, perhaps) set in the era of Dan Dare, Buck Rogers, that kind of thing. With the mad laser guns and such it would be great fun, a space fantasy with Bioshock decor. I've got images of finding the weakspots on lumbering 'This Island Earth' mutants or fighting off the crazies from 'Invaders From Mars'. It'd just be ace, exploring space in a rocket ship and having FPS encounters with alien scum!
Hey! Bethesda! I'll write it for you! I have oodles of pulp science fiction knowledge and Dan Dare was my homeboy! I'm available! I wrote a computer game for Battlestar Galactica, don'cha know! Pick me! Pick me!
Posted by Farsight Blogger