I was at Spirit Games in Burton today and I found Marc Miller's Traveller there for a whole seven quid. 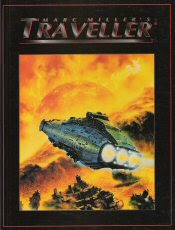 I played Traveller a grand total of twice back in the 1980s. It was basically a Star Wars game - the West End Games D6 game was only a couple of years away so it would have been about 1985/1986. Anyway, it was utter rubbish. The GM was basically trying to emulate Star Wars but kept throwing in Star Trek technology, and the second game wasn't much better. I didn't run a decent hard sci-fi game until 2300AD came out and I couldn't get the players.

My Dragon Warriors campaign is approaching it's conclusion and we're looking at doing a bit of a sci-fi campaign next before Jason starts his Pathfinder games. I primarily got this version because of the Chris Foss art inside - brilliant, inspirational stuff. My wife recently bought me some old copies of Asimov's Foundation books and Chris Foss did the covers. I grew up with this guy and his imagery is what I want to capture in my games.

So this book was perfect for me, then. Great find.
Posted by Farsight Blogger