Back in the late 1980s/early 1990s me and my mate Paul S used to play this a lot. I was rubbish at BattleTech and Paul would always kick my arse (and at Star Trek III: Tactical Starship Combat Simulator, but I got my own back with a couple of games of Dark Future) but he ran some mean MechWarrior RPG games. I played Matthew Haskenn, who started out as an intelligence agent for Davion but then progressed on to a special forces role. 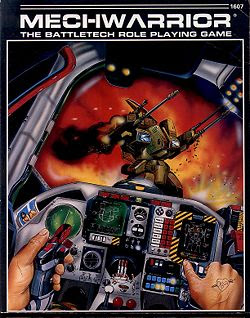 The system was clunky - in fact, it was downright awful - but it was fine for what we wanted it for. Deep penetration and assassination missions into Kuritan territory, hunting Pirate Kings, uncovering internal plots... great times. The BattleTech universe is a fantastic setting to play in (pre-Clans) and is filled with so many amazing possible plots that you'd never get tired of it. They should release a complete boxset with the full original setting (all the house books included), the BattleTech combat game and RPG rules and some technical readouts. I'd pay top dollar for that.

So give me a Rorynex and a crossbow and let me loose - it's time to get into it.
Posted by Farsight Blogger