I've literally just got in from the UK Games Expo and I had an okay day.


It wasn't brilliant. It wasn't rubbish. It was just okay for me. As a roleplayer there was plenty of stuff for me to have a look at - in fact, I got some bargains - but if I had also been heavily into boardgames and wargames I'm sure I would have had a much better time. 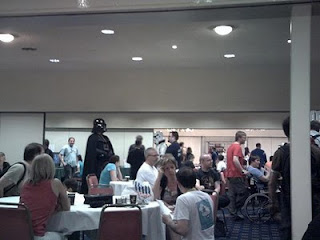 Darth Vader does his rounds

It was a game gathering, not just for roleplayers, and there was some great stuff there. I was impressed by the Warmachine stand, the staff were energetic and friendly, and the game looked superb. That might be worth looking at.

I met Neil Roberts who kindly signed my programme and a print of his 'interpretation' of space marine Hicks from Aliens, my namesake. He was a nice feller and he's into the same things as me. It was a shame because the picture I took, for some reason, came out looking like I'd dropped the camera. 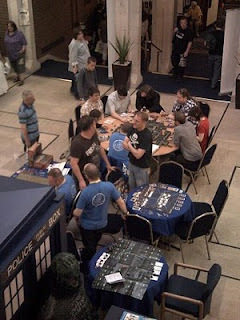 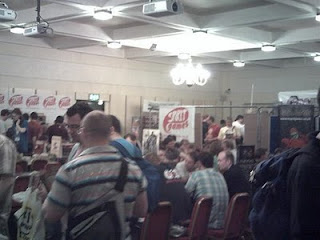 Some random pictures of the event

The bargains I got were three old Mongoose Publishing 'Runequest' books for a fiver each, the rulebook, companion and monster book. Not bad, an entire game for fifteen quid.

It was a pleasure to bump into Carol Mulholland of the independant gaming magazine Flagship (the link might not work as they're having technical problems with their website, so I've linked their Wiki entry) and have a chat. I met her last year and we had a nice conversation about the magazine and games, so I'm hoping to do some writing for her. She deserves all the support you can give.

After all this I had the crowning part of my day - I got to meet Steve Jackson and Ian Livingstone, the guys who bought us Games Workshop and, more importantly, the Fighting Fantasy books. 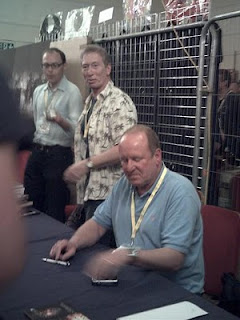 There was an hour long talk - the room was packed to the rafters - where they talked about their earliest days in the 1970s, about Games Workshop, D&D, Citadel Miniatures, Fighting Fantasy books, the lot. It was really very interesting and I learned quite a lot.

There was a long queue afterwards for autographs but I paid it no mind... I was the first guy there! They signed for me my first print copy of Titan: The Fighting Fantasy World... 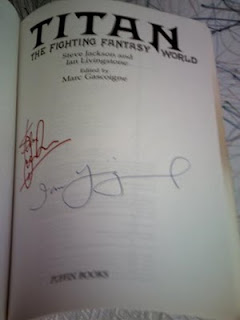 ... and I bought a 'Warlock of Firetop Mountain' 25th anniversary hardback edition for them to sign, and they made it out to my son Bruce. Steve Jackson wrote 'To Bruce, may your stamina never fail!.

It was a good day out. Like I said, it would have been better if there had been more roleplaying stuff but there was enough there to keep me happy. Thanks, people who arranged it all! Looking forward to next year!