Book review - The Art of Thief 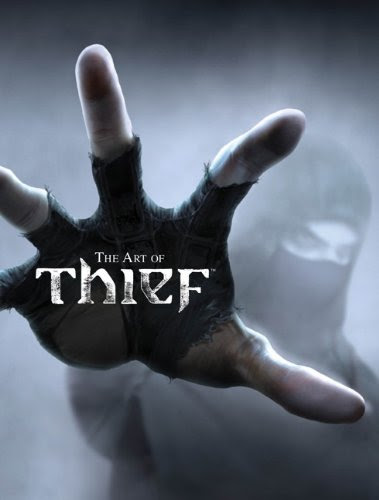 With 'The Art of Thief' Titan publishing has brought together all the elements of their best works to make their finest concept art book yet. Stylish, minimalist front cover? check. Succinct yet still remarkably informative text? Check. Clear demonstration of the iterative design process? To a decent extent, check. Oodles and oodles of gorgeous art that will have you flipping through the book time and again? Double check.

If you already own any of the Titan concept art books for games (Assassin's Creed 3&4, Titanfall and the Halo art books are titles I particularly highly recommend) then you will already be familiar with the format of the book. Just larger than A4, hardback and around 200 pages (191 in this case) and with every page full of top quality artwork. They are the masters of making concept art books and this time they have distilled all that experience to create a superlative offering.

But what about the art itself? As you would expect for a big ticket item such as Thief Eidos have not been stingy with the art department budget. The artwork is top tier material and a real beauty to behold. Obviously, given the nature of the game, it is predominantly dark and moody and the artist's ability to create a real feel for the world they've developed is spectacular. Indeed, you get a very clear feeling of just how much the city itself is a character. With misty Victorian-style streets and architecture, grim dockside warehouses and piers, depressing slums, vaulted ironwork structures, candlelit cathedrals, red brick sewers and disgustingly opulent mansions this is a living breathing world of decay, corruption and misery. And I love it. The art perfectly captures the mood and essence of the game. Being a stylised version of a Victorian setting there is also all of the gadgets and machinery which needed to be designed and I would describe this as Steampunk lite. Lots of brass, cogs and steam but without going fully down the road of Steampunk. It's more functional than stylish and that's completely appropriate given that The City doesn't foster frippery.

The chapter on characters is nice and comprehensive although I would have liked to see more traditional 2D work. The artists use CG a lot and it's not my favourite kind of work but they do it so well that I certainly don't object to it. Lot's of interesting faces and costumes on show, here, as well as items, weapons and devices. There is a good selection of the many different civilian faces you can expect to see as well as some truly fantastic work on the City Watch guards. There are also a couple of other factions at work in The City which I won't go into detail naming or describing, suffice to say that their look and design is equally impressive.

Garret gets a chapter all to himself and it has to be the most expansive exploration of a main character I've ever seen. There's costume details (right down to the different types of cloth and leather on different parts of his body), gadgets and weapons, a remarkable amount of close detail work showing specifics such as hands and eyes, detailed sketches of how Garret would move and operate things and a plethora of sketches showing all the different stances he would employ holding a variety of weapons. There's also nice colour work showing how non-lethal and lethal take-downs would work and, as though all of that weren't enough, just some stylish pictures of Garret for getting a feel of the character. Like I said, expansive.

There is also a chapter on 'Loot, Puzzles and Props' which needs no further explanation. A case of 'does what it says on the tin'. Although I will say that this is where the best of the fine detail work can be found. From personal items to specific objects which are found at certain locations. There is a nice stonework chess table and benches which I will have made for myself and placed in the garden just as soon as I win the lottery.

To round all of this off there are a number of other interesting pieces which can be found in the background of the game. Wanted posters, strange artwork which will be on the walls of the rich and mighty and which matches their character perfectly and embossed metal sign work, the really mundane stuff which is vital to make a place believable. Things like 'WAY OUT' signs and door plaques. That's how thoroughly this game has been visualised. There are also a couple of maps which are fun to look over.


In summary I have to say that I can't recommend this book highly enough. Sure it's a work of dark, grim pleasure but it is excellent work, perfectly presented and a real gem for concept art fans. Lovers of dystopian visions, Victorian inspired cityscapes and well realised settings would also recognise this as a title worthy of note.