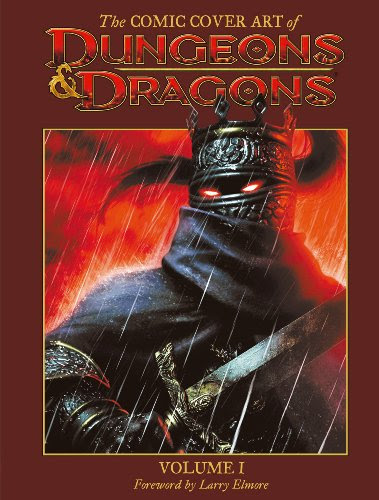 I was going to give The Comic Cover Art of Dungeons & Dragons Volume 1 a middling review because the art isn't of any particularly great quality. In fact the picture on the front cover is the best one, really.

But then I had to stop myself and take into account that this isn't the books fault, but mine for having too high an expectation. After all, the book is clearly called the COMIC cover art of D&D, so I shouldn't have been expecting anything more than comic cover art. My silly mistake.

So, what's inside? Basically what the book title says and if that's all you want then you'll be happy enough. If you want an idea of what the pictures are like then bring to mind the marvel and DC comics you'll have seen in the newsagent.

Then imagine that style but for D&D. I know that sounds obvious, referencing comic covers to explain comic cover art, but it's important for you to have a good idea of what the art's like if you're going to have a chance of enjoying this book based on expectation.

Even so, it's not an outstanding work and will really only appeal to true fans of D&D more than lovers of art.

Following in the footsteps of the Dungeons & Dragons publications that have come before, the covers of Devil's Due's Dungeons & Dragons comics feature cover art that is evocatively beautiful and stand as works of art in and of themselves!

For the first time, every cover from the Forgotten Realms, Dragonlance, Eberron, and Worlds of Dungeons & Dragons series is collected in one gorgeous coffee table book!
Posted by Farsight Blogger