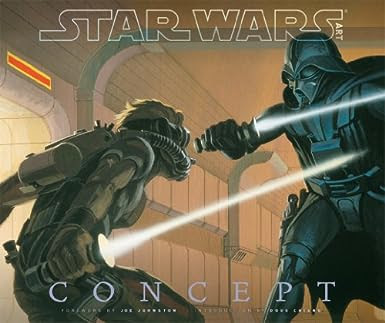 When I ordered Star Wars Art: Concept I was expecting something good but I was still pleasantly surprised with how nice a book it is. It is a big, beautiful book filled with great artwork from all the films, some of the more recent games, as well as the spin-off shows and even artwork for things which never made it to production/release like the proposed Star Wars: First Assault and the now dropped Star Wars 1313.

The art is unquestionably high quality and the way the book is laid out means that the pictures are given pride of place rather than lengthy descriptions and interviews. Those are all well and good in their place but an art book should show art and this one does it beautifully.

It is worth noting that a good portion of the art is from the three prequel films and fans of star wars art will already have most of these pictures if they own the concept art books from the prequel films, the clone wars animated series and the Force Unleashed game. I recognised quite a lot of the pictures from books I already
own and was hoping for more previously unreleased material, especially from the original trilogy (my hopes being stoked by the incredible Ralph McQuarrie picture featured on the front cover).

So while it's unquestionably well made, and there is quite a bit of artwork I haven't seen before, I'm still left feeling like it's missing something. In fairness I should probably point out that I say the same thing about most art books (seriously, read my other review of art books and you'll see it crops up fairly often).

Who will get most out of this book? Star wars fans who don't already own any (or at least many) other star wars concept art books and those people, like me, who need to have a complete collection. Those two groups of people will be giddy as a kid on Christmas with this book. Other than that; fans of concept art will get a kick out of it and, lastly, just nerdy sci-fi geeks (also like me).

From Ralph McQuarrie and Joe Johnston to Doug Chiang, Ryan Church, Iain McCaig, Erik Tiemens, and the next generation of animation and video-game artists, Star Wars Art: Concept collects, for the first time ever, the very best of Star Wars conceptual artwork.

As curated by George Lucas, the artwork that helped bring the Star Wars Saga to life is revealed in all its glory, featuring conceptual and pre-production drawings and paintings from the Original Trilogy, the Prequel Trilogy, TV shows (Droids, Ewoks, Star Wars: The Clone Wars, Detours) and the most recent video games, such as 1313. Spanning the years 1975 to present, Star Wars Art: Concept is a fascinating look at the highly specialised art of conceptual design, the process of taking verbal thought forms and turning them into visual masterpieces.

From pen and paint and paper to the digital realm, the consistent result is the creation of breathtaking iconic worlds, vistas, vehicles and characters that have been seen before--and which successive generations of the public have embraced and made their own.

Star Wars Art: Concept is a book unlike any other--and which could only be brought to you by the creator of the most enduring and popular saga of our time.
Posted by Farsight Blogger