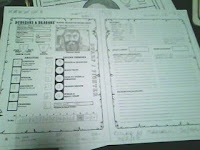 A part of me died, once, on Thursday 21st February, 2013. This highlighted my frustration regarding one of the drawbacks of low-level character investment.

Burgen Beerswiller, a Basic D&D dwarf created on the 27th September 2012, fell under the sword of a particularly nasty hobgoblin whilst trying to clear out a subterranean temple. After 28 kills, attaining level 2 and winning the favour of the locals and the Lord of the region, donating his gold to the local church to fund the rebuilding of a church to St Cuthbert to help bring a failing market town back to prominence and fighting a pitched battle to save a small village, he bought the farm during a random nondescript encounter in a corridor.

I was pissed off with it at the time. Obviously I took a chance with him in what was obviously a dangerous dungeon and threw myself into combat - as I always did - and he fell to three consecutive bad die rolls and a very lucky critical roll so I'm fine with that part of the game as that's the nature of it. Sometimes luck simply isn't on your side.

On the other hand, I'd invested quite a lot into this character. He was gruff but polite, he was gracious to the unfortunate and quite understanding (for a dwarf) and he had a great story arc on the go, so to play him for five months only to have him die an ignoble death with no resolution to the few plots he had become involved in, and even helped to create, leaves me with a huge sense of frustration and playing any other character to continue his quests won't bring me the same sense of satisfaction I would have enjoyed had I completed them with Burgen, the character I created with the intention of experiencing these adventures.

This is one of the drawbacks of this kind of Basic D&D game, in any game where death is a couple of dodgy die rolls away. While I enjoy playing in high-adventure heroic campaigns, where death is dodgeable and major wounds are a minor distraction, it can be a little underwhelming as the danger and sense of risk isn't there. Yes, it's fun defeating the evil overlord in an amazing way but without that sense of death looming over you it can sometimes feel hollow, turning the game into just a shared storytelling experience that might not suit all the gamers at the table. On the other hand, with these high adventure games you can invest time and effort into the character and really develop them, enhancing the roleplaying experience and really watching an epic saga unfold.

The mortality rate of high-risk games such as Basic D&D pretty much scuppers this kind of gaming, and even if you've played a PC for several months there's always the risk of a horrible random death, as is what happened with Burgen. In some ways I got overconfident with him as he'd rolled high for both of his two levels of hit points and I was quite capable of taking a couple of serious hits, and I was used to high-adventure games where the heroes would get stuck in, so it was inevitable that he'd meet a fate such as this. I think what upsets me the most about the death of Burgen is the fact that I had invested so much into him, and the overconfidence meant that I was quite happy to create a history and personality for him as well as make plans for his future in the game. Now all that work and all those ideas feel like a waste of time.

The ongoing problem with this, of course, is that I created a new level one cleric, and straight away I'd given him a past, a personality and a modus operandi... straight away I've invested creativity in a character that might die in his first encounter, but that's the way I game and I can't help myself, and besides - it's called a roleplaying game for a reason. My playing piece is called a character, after all, and if I regarded it as anything else then I might as well be using the boot out of Monopoly.

Not only that, but there may have come a time when my new character, Brother Sagart of the Church of St Cuthbert, would no doubt have continued where Burgen left off so that the DM could continue his adventure, but the downside of this is that it will always feel like Burgen's adventure and this character is just filling in. I won't have the same level of emotional involvement in the game as at the back of my mind I'll be thinking 'this is what Burgen should have been doing - you know, that dead dwarf you played for five months'.

I love the sense of risk, danger and adventure in Basic D&D. It's what gives it it's edge and it's sense of excitement. On the flipside, I'm wary about investing too much time in a PC for fear of wasting my time, which does make the characters simple playing pieces, rolling off the PC production line to give me a chance to roll some dice with my friends.