This is the very first page of my very first Basic D&D adventure I wrote 33 years ago, when I got into D&D and the RPG hobby became one of my favourite things.

I created my own campaign world and the idea was that as the players explored they opened up new areas of the setting. Sadly, it wouldn't get used for another five years in a short-lived campaign I can barely remember. 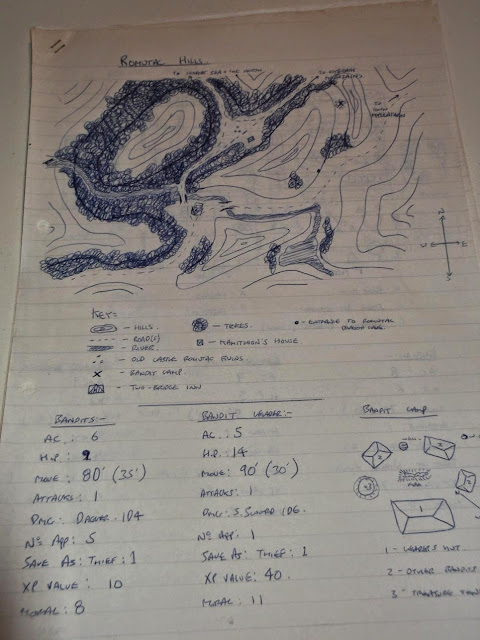 I do remember a fight in a keep on an island just off the coast, and an attempt to slip a knife to a PC so that he could cut a man free who was about to be executed. The adventure was incredibly railroaded, if I remember, as I had the main story perfectly laid out and the players were, for the most part, along for the ride.

There was also a cave with the skeleton of a dragon inside, and a small used campfire within it's rib cage. It was really important for some reason. I think the dragon used to guard the hidden entrance to a massive dungeon, but I don't know if I'm remembering that correctly. Why you'd hide an entrance and then attract attention to it by putting a dragon there to guard it I have no idea. Teenage logic.

The rest of the document is quite detailed, with every location mapped and every point of interest in that location described and statted. I liked to think that I was ready with a foe or an encounter no matter where the players decided to go and so I'd design accordingly. I was a first-time DM then, and I'd try to plan for every eventuality. I also had this 'me-against-them' view of the game as I was new to the hobby and still had the boardgame mentality, as if I was challenging the players to defeat my adventure. I still have that in me in some ways, but now I'm less interested in them beating my scenarios, and more interested in seeing how the players react to them.