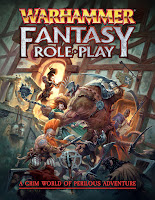 This isn't rumour or conjecture - this is full-on press release goodness from Cubicle 7!

My favourite game of all time is Warhammer Fantasy Roleplay 1st Edition, unbalanced rules and clunky magic system and all, and even though the 2nd Edition had much tighter and, frankly, better rules I always fell back into 1st Edition; the atmosphere, the completeness of the rulebook, it was a wonderful game that I played religiously.

So, now we have the first announcement from Cubicle 7 about the game and the first thing that punches me in the gut is the cover - just look at that! Not only have we got the glossy Warhammer logo based on the original, we've got a whole new bunch of heroes nailing some Skaven. And say hello to the mohican dwarf, the character that sold me on the original game in the first place. John Sibbick's original cover gets some love, and Ralph Horsley is an excellent choice.

Okay - you can mark me down as officially excited and terrified. Excited because this is a great image to get me all excited about Warhammer FRP again, terrified because I can't wait to see what's between the covers so that I know what changes have been made.

Anyway, enough of my excited dribbling - on to the meat.

We’ve been hard at work on the new edition of Warhammer Fantasy Roleplay, and this week we’re going to be sharing the first big slices of news with you!

There has been an amazing amount of excitement around Warhammer Fantasy Roleplay Fourth Edition – we’re at the beginning of the journey but it’s already been a tremendous project thanks to the energy and enthusiasm of all the Warhammer fans we’ve been talking to since the project was announced. Thanks to you all for being awesome, and thanks for your patience waiting for news!

Design lead Dominic McDowall is on hand to tell us about the game’s development:

“The initial plan was to make some small updates to the awesome second edition, and that would mean we would be able to release the game in 2017. We’re all huge fans of the first and second editions of WFRP, and we wanted to take the game back to those roots.

“When I got into the guts of the game I started seeing more opportunities to add in some of the things we’ve learned over the years. This more creative direction meant a longer development phase. Games Workshop are extremely supportive of us taking the time we need to make WFRP Fourth Edition the very best game it can be, and so that’s what we did. I’m very excited about the way things have come together!

“The release date of Warhammer Fantasy Roleplay Fourth Edition will be set for mid-2018, with a specific date to be set in a few months. Thank you for your patience while we invest the time to make the best game we can.”

We have some exciting events planned around the release date, so stay tuned for the latest new on those!

The initial releases for WFRP Fourth Edition will be a core rulebook and a boxed starter set. We’ve commissioned Ralph Horsley to paint a pair of covers for these which we’re very excited to share today! As you can see our desperate band have been enjoying some good times in Ubersreik, (or at least some of them have) before a familiar scene unfolds!

We’ll have more to share tomorrow, including news of the return of a multi-part campaign favourite from first edition, so keep an eye on our website and social media! 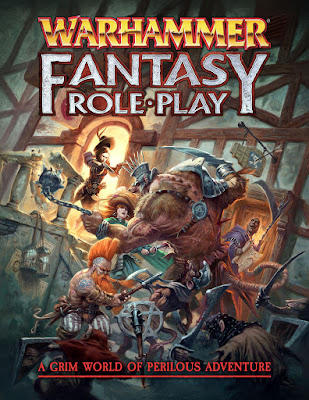 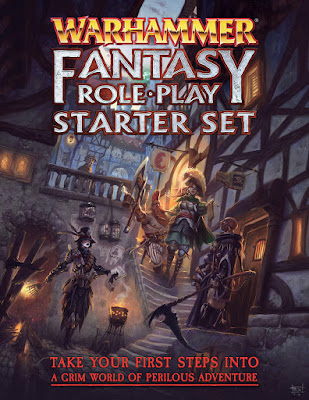