So, for your viewing pleasure, here are some of my first ever game designs for West End Games Star Wars: the Roleplaying Game, from way back in 1987/1988. 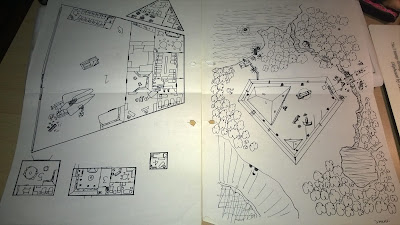 This one is very first map I drew in 1987, the day after I bought my copy of Star Wars: The Roleplaying Game. I wanted my own Rebel base, and I created a small one on an idyllic world of boating ponds and woodland walks. It was designed as a retreat, a place where player characters could go to rest and recuperate, pick up missions and generally hang out. 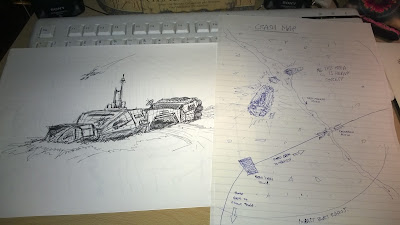 These two were created in 1988, and the image on the left is a downed starship being used as an outpost. At first it was controlled by smugglers, but after being outed the Rebels used it as a small strike base deep in the Mid-rim territories. I remember liking to idea of it but don't remember getting much use out of it.

The crash site on the right is a downed Star Destroyer, the impact of the mighty starship hitting the ground devastated the land for miles around, but the crash also bought trade and industry as the locals used it as place of interest and melted parts of the destroyer down to use - they were a pre-industrial race and they needed the metals for their own wars. By this time, the Empire and other scavengers had already taken what they could and left the rest to rot. 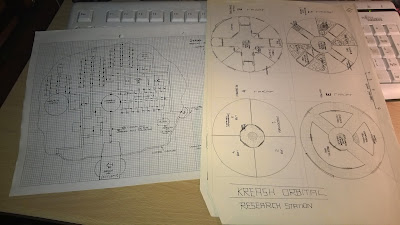 Finally, another Rebel base on the left and a space station on the right. The base was a complicated warren of abandoned tunnels and caves in what was one of many single towers of land on an otherwise ocean world, and as the world had no natural resources of note it was ignored by the Empire. What the Rebels didn't know is that the original inhabitants of the world were returning, and they wanted their homes back...

The research station was created for a standard 'trapped on a station with killer aliens' game. You know... Aliens. It is much larger than you can see in the picture, but the game was pretty derivative and didn't really go anywhere. I always liked the design, though.

You know, I might use all of these again. The 1980s were a great time to be a tabletop roleplayer.