Please welcome to the site Scott A Woodard of Pinnacle Entertainment Group, brand manager and lead writer of THE SAVAGE WORLD OF FLASH GORDON, running on Kickstarter as of this interview.

This is all pretty exciting for me as I'm a huge Flash Gordon fan, especially the Buster Crabbe serials - my prize possessions are a Big Little book from 1937, a Flash limited edition action figure set from SDCC 2015 and a hearty handshake from Sam Jones. I was forced to wash the hand, sadly.

Please introduce yourself and tell us about your gaming history.

Hi guys! My name is Scott Woodard and I have what many might consider to be a pretty wide and varied CV!

Not only have I worked as both brand manager and writer on The Savage World of Flash Gordon for Pinnacle Entertainment Group (currently on Kickstarter as I write this), I previously adapted The Sixth Gun comic series from Oni Press into a Savage Worlds RPG (also for Pinnacle) back in 2015. 2016 saw the publication of my ENnie Award-nominated book, Cinema and Sorcery: The Comprehensive Guide to Fantasy Film co-authored with my friend, Arnold T. Blumberg and published by Green Ronin Publishing. Prior to that, I edited well over 70 RPG products for a variety of publishers including Modiphius, Crafty Games, Triple Ace Games, Reality Blurs, and a few others.

Before working in the game industry, I did a fair amount of professional voice work, I wrote audio dramas for Big Finish Productions including Doctor Who and Dark Shadows, I worked as an award-winning promo writer/producer for network television (Warner Bros. and Disney), and I built and puppeteered animatronic puppets for movies and TV (you can check out my IMDb record for more information about that).

Beyond all that work stuff, I have been into tabletop roleplaying games since (cough-cough) about 1978 when my parents gave my older brother and me a copy of the Holmes edition of Dungeons & Dragons for Christmas. In other words, I’ve been dabbling in RPGs for a very long time!

Since tabletop roleplaying games have been a part of my life for a VERY long time, I feel like I’ve grown to really appreciate and respect them. To me, RPGs are the pinnacle of the gaming experience. The collaborative story-telling aspects thrill me to this day. Also, as a life-long bibliophile, I just adore RPG books and I have a pretty decent sized collection that I dip into often.

All that said, I have never been one to don the grognard cap and crunch numbers to maximize my games. As long as everyone is having fun around that game table, I’m happy. This is why I often open my games (whether at a convention or with a group of friends) announcing that I run my games “fast and loose.”

Lastly, I’m a bit of a ham, so I like RPGs because they give me the chance to do a few voices and characters, even if I’m just doing them to get some laughs from my players.

So, Flash Gordon. What drew you to this particular franchise?

Flash was an important part of my childhood. As a kid, I was watching the original serials with Buster Crabbe on TV and a little later, I became a huge fan of the Filmation Saturday morning cartoon (even occasionally wishing that I could somehow transform into Thun the Lion Man from that series and beat up all the bullies in my school). At the same time, I was also tracking down comic books, toys, and pretty much anything else that had Flash in it.

When the offer came my way to work on the official Flash Gordon RPG for Pinnacle, it was a bit of a childhood dream come true. There was absolutely no way I could say “no.” 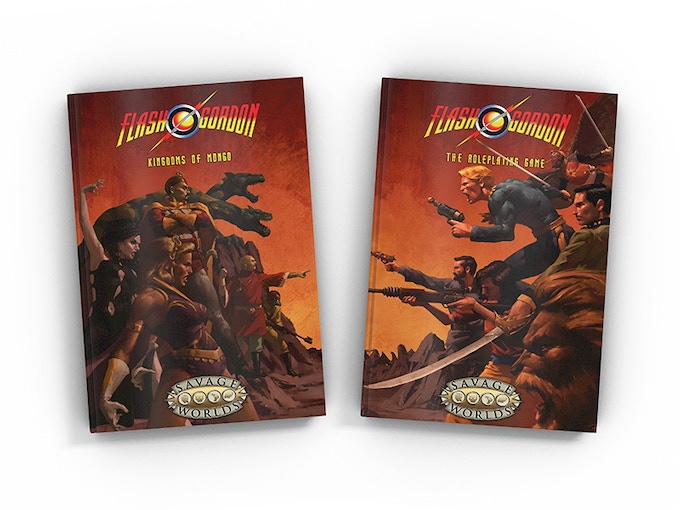 There’s been a lot of Flash Gordon over the years; the Alex Raymond originals, The Amazing Interplanetary Adventures of Flash Gordon radio serial, the Buster Crabbe serials, the Steve Holland TV show, the Filmation cartoon, the Dino De Laurentiis movie, the not-so-recent TV series and all the other shows and comics and novels… you’ve got a lot to choose from which means a lot of fans will be coming at Flash with different visual cues or attitudes. The artwork hints at the classic strips and serials so what era of Flash Gordon are you getting most of your inspiration from? What elements of the world of Flash Gordon do you hope to emulate?

Yeah, there is a LOT of material out there and from the very beginning of this project, I wanted to figure out if there was a way that I could somehow incorporate ALL of it. Not necessarily to take notes on every single serial, comic, novel, etc., but as I did my research (which involved a LOT of reading, listening, and watching), any time something cool or unique popped up, I tried to figure out a way to make it fit into my vision. There is a LOT of crossover (the 1980 movie, for example, features a number of extremely faithful scenes, images, and even bits of dialogue lifted right out of Alex Raymond’s strips), so in the end, it wasn’t as difficult as it might sound.

If a character in a serial or novel mentioned some sort of bird in Arboria that never popped up in the original strip, I often dragged that creature into the manuscript. It might only be an aside (a list of unusual Arborian birds), or it might actually be one of the new monsters in our bestiary!

In other words, in many ways, it is ALL in there, though there’s no denying that our primary source material was the original strips (both Sundays and dailies).

Will you be giving us in-depth details of Mongo, or will adventures enable players to travel further afield?

At this point, it is ALL about Mongo. There’s a ton of material in the core book and we are also releasing a 192-page sourcebook titled “Kingdoms of Mongo” that, obviously, focuses on several noteworthy Mongonian kingdoms, but not ALL!

There is definitely more that we can explore down the line! There are moons in the skies over Mongo that we have not explored in the current material… Flash’s Earth, especially after they begin adapting Mongonian tech for their war machines, is certainly something we could play with… And there is certainly the possibility for adventures beyond both worlds!

Savage Worlds is a good choice for this pulp-style adventure setting, so what kind of changes or additions are you making to the system?

One of the biggest additions we’ve made is The Cliffhanger. You can actually read about it in depth in Update 1 of the Kickstarter. Apart from that, you’ll find new Edges, new Hindrances, a few new Powers, nine playable races, and an extensive bestiary of new monsters!

You’ve annihilated your Kickstarter target in an amazingly short amount of time so there’s a huge demand for Flash; what kind of support will the game receive in the future?

See my answer to the Mongo question... At the very least, you can count on new Flash content to appear in future issues of the Savage Worlds Explorer magazine from Pinnacle Entertainment Group.

What else are you working on? What else can we expect to see from you in the future?

Once Flash wraps up (at least for the time being), I’ll be working on some new material for The Sixth Gun Roleplaying Game to appear in the back of the next hardcover deluxe graphic novel collection coming from Oni Press. I’m also writing an adventure for the Kids On Bikes RPG from Hunters Books titled “Between the Cracks.” My adventure and involvement was the $6500 Stretch Goal for that game’s Kickstarter. I’ve also been working with the Table Titans gang on a few upcoming projects including a 25,000 word adventure for Dungeons & Dragons 5E.

Beyond that, there are a couple other tentative projects on the wall here in my office, but time will tell on those! I’m certainly keeping busy!