Recently, I got lost in time.

I was sat reading a book and became so immersed in it that I realised, after half an hour or so, that I had become displaced in the space/time continuum. I was even more shocked to discover that not only had I moved through time, I had gone backwards. In fact, I had gone back to the 10th century via the mid-1980s. My second concern was getting back home - my first concern was the fact that there were several demons coming at me with claws at the ready, all of them listening to Duran Duran's new album 'Seven and the Ragged Tiger' on Sony Walkmans. 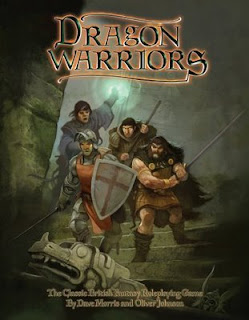 The DRAGON WARRIORS book most definitely gives me that sense of displacement. This fantasy RPG was originally printed back in the 1980s when the Fighting Fantasy books were at their height and, to be perfectly honest, it passed me by. I was too wrapped up in gaming in Allansia and biting down on Redbox Dungeons and Dragons. With many RPG products to choose from it was no wonder that I missed many other games.

DRAGON WARRIORS throws me back to those days of my teenage youth. It's a wonderfully simple game with just enough game mechanics to define a detailed character and allow it to grow, and yet they're not so complicated that you'll spend your first game trying to work out how to create a character and the next two or three trying to figure out how the game works. In fact, as a player, you'll most likely have a character and a full encounter played out in a single session and have your head around the rules ready for the next game.

What struck me most about the book was the atmosphere. This is not a game about flashy magic swords, intricately designed multi-angled armour and high magic (which, by the way, are the kinds of fantasy I'm not fond of - see one of my previous blogs below), but about a pseudo-historical land based on Europe a thousand years ago. Saying that, the game appears flexible enough for you to create any fantasy setting you wish but I'm fine with the setting provided - there was a TV show in the 1980s that I loved called 'Robin of Sherwood' which took the premise of Robin Hood and actual historical events and people and mixed it in with elements of fantasy. It was a show tailor made for my gaming sensibilities and this game reminds me of that show.

I'm looking forward to getting stuck into the book and giving it a proper read. Once I've gone cover to cover and, hopefully, got some games under my belt I'll write a proper review, but I can tell you that my first impression is that I'm excited about what I've read so far.
Posted by Farsight Blogger