Magic in a Science Fiction world

I've noticed that in science fiction when magic is used or referenced it's always a psionic version - the psychic energies create effects and attacks that appear as magic spells. Therefore, psionic bolt attack is just Magic Missile. Instead of the magical energies being derived from mana flow or gods or nature, as in a fantasy setting, the power is from the mind.

Now, I say this because I'm having a look at setting up a new RPG campaign location and I want to do fantasy but I also love science fiction. This got me thinking about marrying up the two, a swords and sorcery in space mix-up, and one of the things that I was considering was dropping the whole 'magic is just psionics' angle and actually using proper magic as used in a fantasy setting. So instead of a bonus-giving magic sword you'd have a bonus-giving magic laser pistol. Runes etched into starship hulls create magical barriers, like shields. You could summon demons to fix your hovercar.

I'm in a fix, though - Warhammer 40K. It leans heavily on the fantasy side of things, so much in fact it sometimes seems they just swapped out swords for bolters, and so anything I do will be coloured by this highly successful game that's been out for more than twenty years. 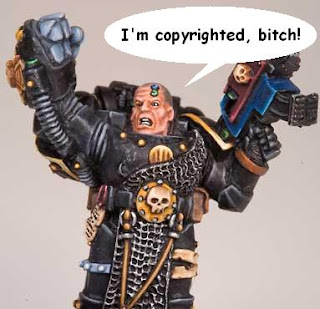